Welcome To Rogers – The Story Of The Phantom Caller

I recently purchased my first iPhone. Here in Canada, like every other country, there’s only one provider of the iPhone, which is Rogers. I’ve really not enjoyed my experience with Bell and I had heard that Rogers was just the same so it made no difference in switching. When I switched our numbers over the Rogers immediately I started receiving long distance calls from the same number 416-645-2105.

The first time I answered it. Silence. I’ve had scams where they first check you’ll answer with a non-speaking auto-dialer. When they establish somebody is there and you’ll answer, they being calling you up and trying to sell you things. My first thought was that I was going to bombarded with calls now. I’d had a similar experience with a competition I had apparently won without entering. Therefore, I told my wife not to answer it and I did the same. What made my suspicious was that we’ve had these numbers for almost 2 years now, so it was a little co-incidental that these calls started when we switched these numbers to Rogers. Was this a glitch in the Rogers system or had they or someone in their company sold our numbers to marketers or, worse, scammers? 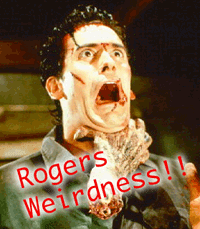 I did some research online and apparently I’m not the only one with this problem. Initially I read only the first few pages of complaints. “I keep getting this call… silence. It’s definitely from Rogers”. Countless people had the same problem since joining Rogers. I tried to call Rogers customers services twice, but 40 minutes was as long as I could wait.

The third time I called I was set up for a long haul. I had my cuppa tea (Earl Grey) and called them from Skype so I could be hands-free and surf the Internet whilst I listen to the on-hold music of Michael Bolton and listening to how important my call is in the “higher than unusual” call load. So as Michael sang about “how the love isn’t like it used to be”, I read into the Rogers complaints on the website a little further. Somebody wrote of how they had called the number back and it was actually Rogers Communications on the other end of the line. Someone else had done some more research and found it was a money saving exercise by Rogers.

In order to optimize their call-centre 100% they have a machine call you. When you answer they pass it off to call-centre employee. The only problem with that is when they are too busy to answer your call. This results in the silence on the other end of the line. Better for Rogers, a nightmare for the customers. Some have been plagued by this for months and months up to 7 times a day. Rogers refuse to block any numbers.

When I finally got through to the nice lady at Rogers customer services they said there was nothing they could do about this and they know nothing of this number. Which is strange, since I found a number of other people who had reported the same thing. I spoke to her manager who told me they would investigate. I hoped they could resolve it.

10 minutes later the phone rang. “Rogers Weirdness!!” was the caller-ID. I set it to this so as not to answer it by mistake. I also used a picture from Evil-Dead II to scare my wife into not answering it. I answered the phone. “Hello?… hello?”, I patiently waited for the silent machine to hand over call to a human. “Hello?”, I waited. A few moments later, “Hi! This is Rogers Customer Service calling you to welcome you to Rogers Wireless”. I could not help but laugh out loud. I explained to her what had been happening, but I could tell that her call-quota was diminishing by her listening to my story. She was relieved when I let her continue to confirm my details and go over my plan. She confirmed that myself and my wife had been removed from the system.

Now I wait to see “Rogers Weirdness!!” appear once again on my phone. I know there are countless others out there who have switched to Rogers to get the new iPhone 3G. My advice is to stay on the line when you get a call from 416-645-2105. Wait past the silence. End the nightmare.